Marvel’s Eternals is a 2021 movie about immortal alien superheroes who protect the Earth from their counterparts, the Deviants. These Eternals are only one set of such superheroes protecting each a part of the universe. The excitement for watching this movie was threefold:

From the outset, I was already shouting at the screen. “Remove the introductory reading. It is boring and forgettable, and therefore a waste of time and effort.” “Have the father run, grab his son and start escaping immediately.” After all, he does not watch Hollywood movies. He has not yet been contaminated with the reflex of the expendable extra to stand and stare before scripted danger. He lives at the prime of “flight” for goodness sake. And it happens again, later on. A child just stands in the middle of the chaos of murder as if anyone would. They would run and hide, especially when someone gets hurt (murdered by the way) next to you! This film is a little stupid at times or just confuses common sense with industrial advancement?

The Eternals themselves are introduced in that spirit. They knew “it is time”, but they did not hurry to the danger, too busy as they were, flirting and introducing themselves to each other. Seriously, is common and hero sense really fading away? While you’re at it, remove the stupid name introductions. They’re already forgotten and time’s a’wasting! Why must we suffer through the reason why every Marvel superhero movie after Thanos did not do a thing against Thanos? Why couldn’t Eternals only activate against deviants not other beings? Is it so we have multiple villains and Ikaris fulfill his name’s fate? 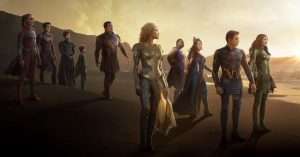 I smile as I see each of them showcasing their powers. So, we have Superman, The Flash, a Bollywood cowboy, super Jolie, Iron fist i.e. the puncher, Salma Hayek, I mean the healer and the others. Best entrance: Angelina Jolie. Love that she does not attack from a distance and faces the danger right upfront. She used her super hero credits and paid a little of the debt. Best god-like pose: shared between Superman looking at the world from up top after defeating a deviant as if to let them gaze at his splendour and Sirsi’s remake of the Da Vinci’s god and man scene: this time, man will not be touched and the knife that is the intermediary must be morphed, their first interjection into human affairs by the way, that they so insist they are not supposed to. Or maybe it is just all of them posing for the hero shot. Seriously. Suspension of disbelief, suspension of disbelief, suspension of disbelief…. Aarrgghh…

So, do they sleep until awoken like in the beginning or do they roam around the world and speak like puny humans?? (I mean Sirsi says “s***”!) and of course is late because she is in an American blockbuster. Suspension of disbelief is hard work when there is so much copy/paste. And work requires paiement, this is another debt.. You might as well have played “What if god was one of us”. They are after all called Eternals.

I cannot begin to see the whole need for lateness, underground, exchange with game of thrones apart from giving the kids a voice. They could have as easily started with an earthquake in the middle of her lesson. Seriously. And of course, no one so her using her powers because it was just for us to know she has them. I am bored.
So they can’t sense deviants now? Omg there are so many contradictions.
please keep dane safe but take the deviant into real populations where there are 100s of someone else’s Dane! Aaarrrggghhh
and do people need to be told to run wwhen they see this? Seriously. That movie is infuriating. I would give it 0 so much I am pissed off at its waste of great actors and people’s time.

WE are so lucky that the deviants wait to attack. Becuase you wouldn’t believe the way they quietly decide to get everyone and the way they slowly eventually do that there is any urgency to the matter or that they basically don’t know when the deviants would attack next. It is basically as if they knew when in advance, as if they had read the script, as if they were mere actors in a screenplay.

Now for a stream of really annoying moments 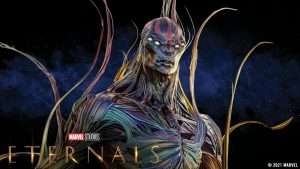 I am getting whiplash from all the back and forth in time. Not a single one is necessary or useful and linearity would have worked much better.

I am getting tired of seeing heroes turning their back to danger without ensuring that it has disappeared just because the enemy fell and stopped fighting. This movie is dumb. Recognise more of the dialogue? “There is something special about this planet.” By the way, why does Salma’s hair move as if a smooth brise was blowing on it? Are they not in space?

I have had enough of hearing references to other Marvel properties, from Thanos to the snap, to the avengers. And “it has to” is no response to “Will it work” already!

I did not enjoy the suggestion that humans could not innovate but for “gods” or wars. That is a terrible and false opinion to share with children. There’s clearly an inner battle in these superheroes even after centuries of existing are still asking themselves mundane human questions shows a loss. I don’t mind theories but the whole point of superheroes was to use their superpowers to protect the world from harm coming from a superpower they can’t handle. Has it become to hinder our natural development? Is Marvel’s theory that we are not able even in our mental capacities but for their help? Wrong message man. Waste of time and wrong effect.

Seriously, if I hear “you’re late” again, I will… aaarrgghh. It was barely tolerable when they attempted to make it Sersi’s thing. Now Makkari. Late to what?!

This movie is ssooo long. There are so many fillers! It is hard to understand why they were deemed necessary. Are they there to paradoxically showcase how many times the Eternals interfere in human affairs? Are they there to show a growing attachment to a planet that they were asked not to get attached to by the same being who kept them there? Did the love affair between Ikarus and Sersi necessitate so much complex developments or even a Games of Thrones’ Kit Harrington? Of course, the language mistakes are the usual suspects. I don’t know that I can be any more infuriated at this waste. I love that we keep inventing aliens and keep giving them human characteristics all the way to sex (in the sand for goodness sake! Who in their right mind… -sigh-). I wish the lack of action was compensated by a great message but it all feels so empty. Is all these useless drama about character development? I am always up for a Bollywood moment or even 3 hours of it but this does not fit in. It is almost like trying to balance a story (or lack of it) with individual demands powered by star power. Was there ever a question between saving a production and saving the world? The BTS ad, the app ad… sigh.

Some missed opportunities and a final verdict This American movie missed the opportunity to highlight the importance of using the right instrument for the right purpose. A hammer (pun intended) is far too powerful to kill an ant. Druig should never have been let to influence men because a protector quickly becomes a bully with that power. This is also the reason why the powers are distributed among many rather than concentrated in one being.

There was also an opportunity to insert some real historical facts just to leave a little bonus in the beautiful sceneries. Also, it takes as long to show as to tell a story. The number of times things were said that should have been told is flagrant. Finally, it did really bother me that it was the sensitive ones that died from Salma Hayek’s character to Gilgamesh. Is it supposed to be the case that once you know they are fancy robots, you can tolerate their deaths?

Most of the first part did nothing for my suspension of disbelief. Afterwards, I was just too annoyed, -5/10. I did feel that the movie managed to balance its ridiculous amount of heroes. There was great acting too and each were finely cast. A caveat of too many protagonists seems to be a necessary civil war. Thena’s actually turns out to be interesting while Ikaris was more predictable. That is an easy 8/10.

The film has some nice fights but not original or inspiring: 5 out of 10. I did like the special effects including the deviants and the sets. There was a lot of beauty around and in the power effects too. This is an easy 8.5. There is substance to this but the story itself, the way this substance turns into plot, is too full of contradictions, unecessary complexity, clichés, unworthy of Marvel and wasting the actors. Sorry, it is a 4 out of 10. The moment of substance for me is the mini-rebellion after Thena’s first attack and the few seconds of reveal of Phasto’s family. The death of Gilgamesh was almost expected,, sad but too by the numbers to truly be poignant. Unfortunately, the substance does stop there. 5 out 10. The beautiful sceneries and people and even villains make the photography beautiful and a well-deserved 8+.

Something I don’t generally point out unless it is negatively shocking or, so rarely, wonderfully positive in some way is diversity. The film get 9+ out of 10 for that for two main reasons. I absolutely loved the addition of sign language. It would have been easy to argue that a supreme being building a high-quality robot would not deprive it from any sense that will jeopardise its mission. But I completely love and embrace the wonderful way this was handled. The movie refuses to view things as would a majority of humans, blinded (pun intended) by their own so-called ability. It comes out of a bordered mindset to see things as they would through their I am not certain it was used at its best. I cried when I heard xxx speaking arabic and cried some more when I realised it was Phastos’ husband. In spite of that ultra redeemind feature, the viewer is left feeling wanting, and painfully and overwhelmingly underwhelmed (4 outof 10). It’s not a bad film, just sort of ok. Hence, the overall score is a barely scraped 5 out of 10.