TORONTO, Oct. 26, 2022 (GLOBE NEWSWIRE) — Casey House – a hospital unlike any other providing care to those living with and at risk of HIV – is utilizing cinematic horror to bring attention to HIV stigma. Others – directed by renowned filmmaker and screenwriter Paul Shkordoff – sets out to highlight the impact of judgement and what it can feel like to be haunted by stigma. This Canadian movie marks the first time a professional actor living with HIV was intentionally cast to play an HIV+ lead protagonist.

Beyond creating an inclusive environment

“As a hospital that strives to create an inclusive environment where everyone feels safe, we’re also tackling the deeply ingrained stigma associated with HIV,” says Joanne Simons, Casey House CEO. “Others will spark needed conversation on the impacts of stigma that people living with HIV face every day. Horror is a genre that allows for complex social issues to be presented in a compelling way. An evolution of the hospital’s ongoing #SmashStigma initiative, the Others campaign looks to harness the power of fear – which fuels stigma – to spark conversations around outdated misconceptions about HIV.”

The use of the horror genre

There are various reasons why horror films are capable of triggering strong emotional reactions related to fear. Research shows that both traditional fight-or-flight responses, and an individual’s personal and prior experiences, contribute to how one will respond to horror films. I believe that the unique power of horror films is that they bring on an immediate response in a relatable and engaging way in a safe setting.

Despite medical advances in effective treatment for people living with HIV, the disease is still shrouded by prejudice and discrimination lingering from the AIDS crisis of the 1980s. According to data from UNAIDS, “across nearly all regions there are countries where large proportions of adults continue to hold discriminatory attitudes towards people living with HIV.” And, according to The Positive Effect, 80% of those living with HIV in Canada have concerns about disclosing their HIV status due to stigma. 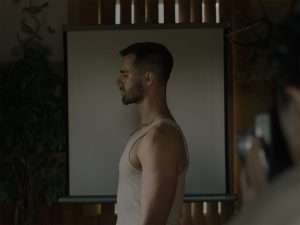 When I first read the Others casting call for an HIV+ actor I thought this sounded like an interesting project I wanted to be a part of,”  “But when I read the script, I instantly felt an intimate connection to the character. I get what the character has gone through,” he continues. “I’ve experienced the fear that stigma creates.

Representation in film helps open people’s eyes to the experiences and challenges of others. While this film is a work of fiction, Others was inspired by the lived experiences of HIV+ individuals, six of whose stories are featured at the end of the film.

“The effects of discrimination are felt by the HIV+ community every day,” says Alex, a documentary participant involved in the project. “This film [Others] is a powerful tool in showing audiences the repercussions of discrimination while sharing stories from HIV+ individuals who continue to overcome stigma.”

Find out more and watch

Visit SmashStigma.ca to watch the film and learn more and follow on social: #smashstigma.

This is to give you a better idea of the purpose of Casey House and the people behind it. It gives you an idea about the fact that the movie Others was a natural result of their work and ideals. This is what they say about their organisation, in their own words:

Casey House is unlike any other hospital. We are a specialty hospital in Toronto providing ground-breaking care to people living with and at risk of HIV. Together with our clients, staff, peers and volunteers, we strive to create an inclusive environment where everyone feels safe. We offer a growing mix of inpatient, outpatient and community-based services that meet clients where they are in their individual journeys of health and wellness. Building on a legacy of advocacy and social justice, we actively dismantle barriers to care and safe living. We provide a community and sense of belonging that connects people to care. The humanity of each client is at the heart of everything we do.

As part of their work towards releasing the movie to fight the HIV stigma, the hospital has conducted extensive research on the matter. It has released some astonishing data. These supporting statistics showcase the stigma and discrimination against people with HIV.  The statistics include both Canadian data demonstrating what people living with HIV must endure, even from the health services and the North American data including the persistence ignorance and subsequent prejudice surrounding the disease, so many years down the line. Some of these highlights the fear that remains to the point that, as the survey reports “nearly 40 million North Americans would rather not know they had HIV/AIDS even if they had
the disease” and as a consequence, many who have it don’t know they do.