This article is part of Thor Love and Thunder: Movie Review. This is Act 1 as it where where we look into the villain Gorr the God Butcher. We watch the villain, Gorr the God Butcher, in the early stages of his grief cycle as he goes through a transformation of the mind and the body which could have benefitted from being more obvious.

This article is part of Thor Love and Thunder: Movie Review. This is Act 1 as it where where we look into the villain Gorr the God Butcher. We watch the villain, Gorr the God Butcher, in the early stages of his grief cycle as he goes through a transformation of the mind and the body which could have benefitted from being more obvious. 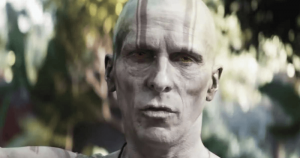 Gorrs’ introductory scenes state their purpose from the outset. The audience sees where his anger comes from and what fuels his new life mission, the premises of the movie. There are a few issues with these 6 minutes and 40 seconds scene. First, it is far too long. We didn’t need to see the child die. We did not need to see the man pray. We did not need to see even a second of his walk to an oasis whose apparition we wonder more about than we can suspend our disbelief about its presence. The words spoken cheapen the moment. 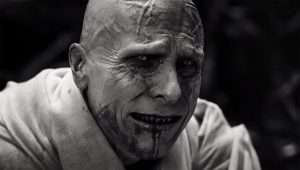 The brievity and quietness would have added to the ominous atmosphere. A desert shown in its immensity, its emptiness and in the middle of this nothing, a child, dead, held in the arms of her father. The heaviness of the moment would have distracted us from the initial makeup which although wonderful could not quite persuade me it was the result of the climate, hunger and desolation. What breaks the silence is the final cry of a man who awaits his own death, calling his god for a last time. We can definitely do with a villain that monologues not, at any time. 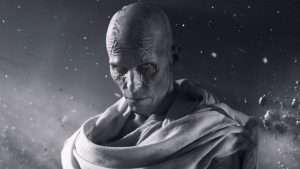 Seeing the god appear in his bounty, height and colours in the middle of the monochromatic and desolate scenery, with the mortals looking ever tinier would have been more effective. It would explain why he appeared not far from his disciple. This moment would explain why he appears now when he normally cannot be bothered. “Will you mortals give me peace already!”, he will roar.  He may have an entourage if the director insists. It was an interesting touch, the cost of which might not justify the means but a nice touch all the same. They gravitate around him as he appears and echo his every saying. “I sense your insult, whatever is the opposite of worship growing in you (and I am here to annihilate it before it takes seed)”. But the child is dead and the father will not apologise for he knows that this is not a god who raises the dead. This is the god who came too late for his daughter. “Now? Now, you come?”, he rages. “Now? Now that the lives that worshipped you died one after the other with your name on their tongue, begging for you to come to their rescue, to save their lands, their loved ones, their young ones, their… (painfully) daughter? And YOU dare to be angry that I disturb you, the last of my kind, forsaken through death by my own, through starvation by my land, and through indifference by my own god?” These are the words of a man whose faith was lost with the last breath of his daughter. And to this man who gods have forsaken, only one voice will respond, that will be shown alternatively as he grows enraged, shaking from the grounds were it hid, waiting for a will that strong, that determined, that lethal. And as the sword makes its way to its new owner, with the latter morphing empowered by the sword through his rage, the voice of its fate resounds as he throws his amulette to the floor with one hand, grabs the sword and slays the god with the other. As per the movie, the final image is that of the amulet on the foreground but with the stained sword on the background rather than the god’s head, a sword being taken to its next job. Although the god gold dusting is a beautiful imagery too but this is phase whatever number now.

The two paragraphs above start and showcase the beginning of Gorr’s transformation. That far, the transformation is mainly powered by vindicative rage. This happens as he decays into the hands of revenge and destruction, giving himself completely to it. He knows he would have, guess what, avenged his daughter, before joining her in the afterlife. To think that villainy suffices to undermine a valid point is to be a little naive. Taika Waititi is, no doubt, a bit of genius who draws its talent from a mix of childlike madness, practice and comedy. This has turned every Thor he has directed into fun and enjoyment for the whole family. However, this part required the grown-up in him. Every time where, in the movie, he tackles a deeper subject, he almost immediately cheapens it by throwing comedy at it, missing the tragic timing, clearly in an effort to lighten the mood. But this pain, Gorr’s pain, required less light handling.

There are parallel transformations of Gorr and inner contradictions from the outset to the last minute of his life. He goes from devotee to God Butcher. He starts drained and powerless and becomes full and powerful. There is an ironic and deeper third dimension that shows us that the powerful is in fact powerless, the God butcher is just a devotee to another god, the invisible god of the necrosword, the owner of the voices he hears without, or is it within? To see him being in all those places would have painted a more wholesome picture of devotism, than that of a underdeveloped and disgruntled atheist. The generalisation and bump from “my god betrayed me” to “all gods must die” is silly. The corruption process does not take place all at once because he is either reluctant as he holds on to the image of his child and his own purity when he meets her; or his body can’t take it all once. We needed to know that the graduality was a physical or a spiritual war to understand why his arsenal and appearance changed each time rather than a convenient display of power or gore for cinematographic effect/show.

The villain’s name already make this movie a PG-13 or worse. Yes, there are scenes that you cannot show in a PG-13 content. But there are ways to still demonstrate them without omitting them altogether. The omissions are actually more detrimental to the young mind. They are led to think that all gods need killing because one god disappointed which feels more like the scriptor’s perspective forcing itself against the natural narrative. The growing mind is left to think that revenge empowers because although the corruption is mentioned, the power is a lot more ascertained than its inner destruction. After all, Gorr grows in power and at no point do we see his inner suffering. The outside appearance may be a consequence of taking on the new mantle but nothing shows that it is a negative consequence of anger or revenge, except if you have any prejudice of associating the darker colours with it and for others to bridge the gap between villainy and self-destruction. What makes it PG-13 or more are not the “intense sequences of sci-fi violence” but the far deeper subjects that are being half-tackled half-baked and then moved on from with a laugh or a cinematic cut.

The name Gorr the God Butcher is heard far more than is his butchery is seen. A scene that shows the many gods slaughtered is displayed via Hollywood’s infamous transparent holograms. The presentation is blurred and confusing and necessitates the narration that Thor provides: “Look at all those gods, murdered”. On top of it, it last less than a second (I had to pause the screen) so that we end up in the usual Hollywood loophole: that Thor responds not to the horror he sees but to the fact that one of his friends are in peril. This is definitely not a message for the kids. A hero, as Aquaman’s mother paraphrased once said (I know the DCU is not the MCU but moral is universal, I mean multiversal?), “A king [a god] fights only for his nation [people/followers/friends]. A hero fights for everyone“.

All that we truly needed was a battle, starring Lady Sif and Falligar, God of the Falligarians, versus Gorr. This would have been an epic opportunity to introduce “one of the nicest gods you’ll ever meet” for longer than the easily forgettable sentence that introduced him as such, giving us a bit more perspective that not all gods are the same (remember that Thor, whilst a God, is considered more of a superhero). It would have been an opportunity also to see a God in battle with powers that are beyond a mere physical fight. It would have been a welcome sight to see Lady Sif in her element before she lost her arm. Less tell, more show.

Demonstrating the difference between his killing Rapu and fighting Falligar would have shown power. Then two seconds panning over the other defeated gods would have come as no surprise as an aftermath, increasing the excitement for the final battle. It would also justify why they needed two Thor and one Valkyrie to do the job.

I can’t help feeling that Christian Bale, the audience and Waititi himself deserved more of a villain depth.